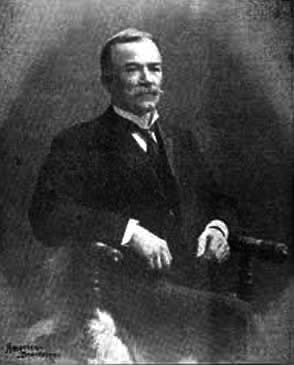 Frank BentonFrank Benton (July 5, 1852 – February 28, 1919) was an prominent American entomologist, researcher, beekeeping innovator and author. Benton studied at Michigan Agricultural College, University of Tennessee, the University of Munich, and the University of Athens. He was a member of various organizations: Bureau of Entomology in the United States Department of Agriculture, Entomological Society of Washington, North American Beekeepers Association, National Geographic Society and the American Association for the Advancement of Science. He is also known for invention of special mailing cage for shipping queen bees (Benton Cage).

At the dawn of industrial farming, many countries faced sometimes formidable challenge of increasing agricultural productivity by naturally stimulating the plants that had been declared a priority for national farming and the agriculture industry. Numerous attempts to enhance the efficiency of local beekeeping farms did not lead to tangible results. It was then that a program arose for the US Department of Agriculture for the introduction of best suitable bee breeds capable of providing the farming with the most important biological functionality - pollination.

For this aim Benton traveled to many countries from Europe to Palestine and Far East. In 1905 Benton visited Georgia to further investigate the Caucasian honeybees which were already known to US beekeepers from 1890.

Benton greatly supported the import of Caucasian (Georgian) Mountain Grey honey bees to the United States. It was only after Benton had been placed in charge of bee culture in the United States Department of Agriculture and made his second trip abroad, that Caucasian bees became well known in the USA. Based on a list of breeding facilities published by the US Department of Agriculture in 1943 (Bulletin E 297) there were 43 Mountain Grey breeding apiaries in the United States, including the first in Iowa, accounting for approximately 25% of all queens produced in the USA.

The merit of Benton, who opened the export of the Caucasian Bee to Western countries, is great. During his research of big bees (Apis dorsata) in India Benton contracted "jungle fever". Benton died at Fort Myers, February 28, 1919. 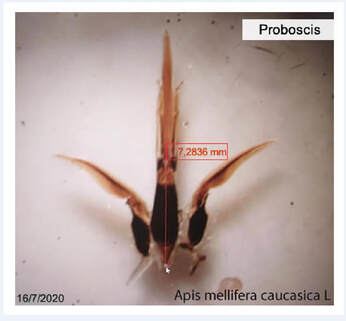 CAUCASIAN BEES .  HISTORICAL ADVANTAGES OF CAUCASIAN BEES; RESEARCH AND EXPORT TO THE UNITED STATES AND EUROPE
Georgia has a long history of beekeeping. So far, the oldest remains of honey in the world have been found in Georgia. In 2016, during the construction of BAKU–TBILISI–CEYHAN PIPELINE Archaeologists have found honey remains on the inner surface of clay vessels in ancient tomb, dating back to some 5,500 years. Georgia is the central homeland for the endemic species of Caucasian Mountain Grey honey bees. Caucasian bees have legendary ability to produce large amounts of honey despite cold weather, light rain and unfavorable climatic conditions. Caucasian bee’s proboscis length is about 7.3 mm, therefore it can reach nectar that its competitors can not.

At the beginning of the 20th century, at the dawn of industrial farming, many countries faced sometimes formidable challenge of increasing agricultural productivity by naturally stimulating the plants that had been declared a priority for national farming and the agro-industry. Numerous attempts to enhance the efficiency of local beekeeping farms did not lead to tangible results. It was then that a program arose for the US Department of Agriculture and other countries to search for the introduction of best suitable bee breeds capable of providing the farming with the most important functionality - pollination.

The state of beekeeping at the beginning of the XIX century, the lack of development of the whole teachings about the variability of bee traits did not allow for the consolidation of practical solutions to the problem. It was decided to look to different continents and countries in search of an acceptable bees. Western scientists began to establish contacts and study the works of leading beekeepers of USSR. The work was not in vain - the choice fell on the Grey Caucasian Bee, which was referred to as Mountain Grey. The irreplaceable contribution in research of Caucaian bees made by such luminaries as A.M.Butlerov (1828-1886), K.A.Gorbachev (1864—1936), V.V. Alpatov (1898 -1979), I.N. Klingen (1851-1922), F. Benton (1852-1919), E.F. Phillips (1878-1951) played a decisive role in determining the commercial vector of cooperation beteen Georgian and foreign beekeepers and worldwide popularization.

The merit of the American entomologist Frank Benton, who opened the export of the Caucasian Bee to Western countries, is great. Benton worked in the U.S. Department of Agriculture. His mission was to search for the best bee species that would be ideally suited to the U.S. agriculture. For that purpose, Benton traveled to many European and Asian countries. Benton is also known for invention of special mailing cage for shipping queen bees (Benton Cage). In 1905 F. Benton visited Georgia. Here is what K.A. Gorbachev writes about this visit ("Beekeeping Life", No. 2, 1907, p. 45): “A famous American beekeeper visited us in the Caucasus. The purpose of his visit is to get acquainted with the Caucasian bee... Benton is delighted with the Caucasian bees and predicts the most brilliant future... There is another huge advantage for the Caucasian bees: their tongue is longer than that of the bees of Central Europe”. Benton recommended the import of Georgian bees to the US Department of Agriculture and American beekeepers.

Thanks to Benton's visit the export shipments were carried out from the Tbilisi Silk Station to the USA and Europe. This is what Polish beekeepers wrote, who imported the queens from Georgia - “The bees amazed us by taking honey from Clover and Lucerne while the local bees did not fly up to these plants”. It is necessary to explain why exactly Polish beekeepers paid attention to the fact that the Caucasian bees gather honey from a red clover. In pre-revolutionary Russia at that time, red clover was almost completely absent in the farming with its three-field system. Multifield with legumes as crops enriching the soil with nitrogen was more common on the estates of Poland than in the estates of Russia. The significance of the length of the proboscis, as a sign that determines the suitability of bees for working on red clover, was widely discussed in the first decade XX century printed media. This time includes the invention of a large number of different glossometer devices, which make it possible to measure the depth from which bees can extract nectar. All this led to a more professional scientific study of the physical and biological characteristics of the Caucasian mountain grey bees which were named as Apis mellifera var. caucasica (1916).

On these observations grew the research of I. N. Klingen about the beekeeping industry. From 1907 to 1911, the practice of using Caucasian bees to pollinate red clover was put into practice. I.N. Klingen’s work showed that the Caucasians are a factor in the very significant increase in the yield of red clover. A. S. Skornikov was able to show that of the Caucasians grey mountain bees, the bees of Mingrelia region (West Georgia) along the Inguri River have the longest proboscis ever measured, namely 7.21 mm.

In 1932, Everett Franklin Phillips, a professor at Cornell University (a key figure in American beekeeping), arrived in Georgia from the United States on a special mission. He acquainted with Caucasian bees even more and focused on its importance and great future prospects. As a result of different scientific researches, Benton’s and Phillips’s missions in Georgia, as well as the US Department of Agriculture recommendations, the United States made a historic decision to conclude a trade agreement with the USSR, which provided for the direct imports of queen bees from Georgian SSR to the United States.

As it turned out, it is the Caucasian bees who is the absolute champion of pollination of deep blossom plants and legumes, which accounts for 47% of world agricultural crops - this is clover and alfalfa, and beans and acacia and peanuts (USA is in the first place in terms of peanut cultivation), this is both lentils and soybeans and peas and so on. In Poland, Scotland and the United States, bee breeding apiaries were created in order to boost Caucasian queen rearing. Here is what V.V. Alpatov writes on the results of the export of a Caucasian bees to US - “As an indicator of the role played by the Caucasian bees in beekeeping in America, I will cite my count of apiaries in the United States selling queens of one breed or another. This count is based on a list of breeding facilities published by the Department of Agriculture in 1943 (Bulletin E 297) It states that there are 43 Mountain Grey breeding apiaries in the United States, including the first in Iowa, accounting for approximately 25% of all queens produced in the USA. It is the biometric length of the proboscis and persistence in in nectar collection that allows the Caucasian bee to be indispensable in the huge industry of legumes in the USA and European countries”.

nformation on the import and research of Caucasian bees in Scotland is given by J. Tinsley: A comparison of different species of bees imported to Scotland (including Italian, Dutch, French, Cypriot, etc.) showed the best results by Caucasian bees. They collected the most honey and propolis. It has been found that Caucasian bees work from 4 a.m. to 11 p.m., and other species from 6 a.m. to 7 p.m.

3 gold medal awards started a new era of popularization of Georgian grey honeybees. First Gold Medal was given to the Georgian honeybee in 1961, at the International Exhibition of Gardening in Erfurt (Germany), next time, the Georgian honeybee was awarded a Gold Medal at the jubilee celebration of the APIMONDIA 20th International Congress of Agriculture in Bucharest (Romania) in 1965, and the third Gold Medal was received at the jubilee celebration of the APIMONDIA 23th International Congress of Agriculture in Moscow in 1971. According to Sunday Mirror a newspaper published in UK: "GOLDEN BEE the grey mountain bee of the Soviet Union has been judged the best in the world and awarded a gold medal. The grey caucasian bee is distinguished for its industry and it collects honey, even when it is raining. Many foreign beemasters have requested for the Golden bee and as many as 200 000 have been sent to Europe, Asia and America this year." Pure-strain Georgian honeybee was spread in more than 40 countries of the world, including: Germany, France, Switzerland, Poland, Belgium, USA, Austria, Australia, India, Brazil, Japan, England, Bulgaria, Cuba, Finland, Algeria and other countries.

Export growth between the Soviet Union and the Western countries was intense. All the amendments to the trade agreements from 1931 to 1986 always applied to the export of Caucasian bees. With the collapse of the USSR, economical downfall and civil wars, export of Caucasian queens to the West legally stopped. Georgia regained its independence in 1991. From 2000s Georgian entomologists and beekeepers started revival of apiculture in the country. Georgia is striving to implement EU standards and OIE recommendation in beekeeping. This will allow renowned pure strain Caucasian bees to enter again legally to EU and American markets in near future after 30-year interruption. 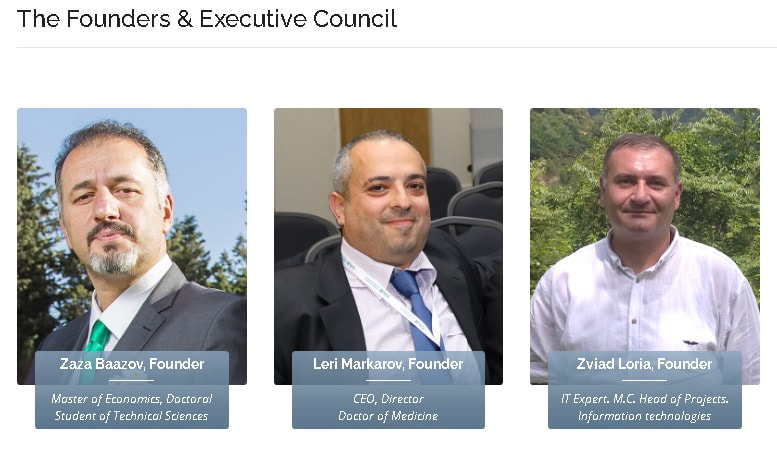 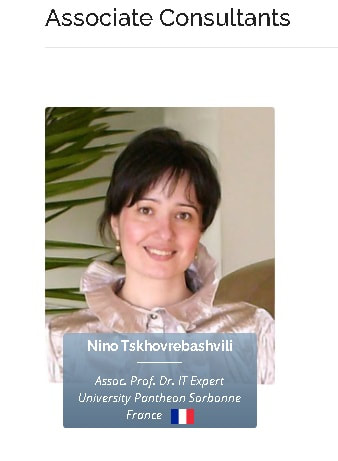 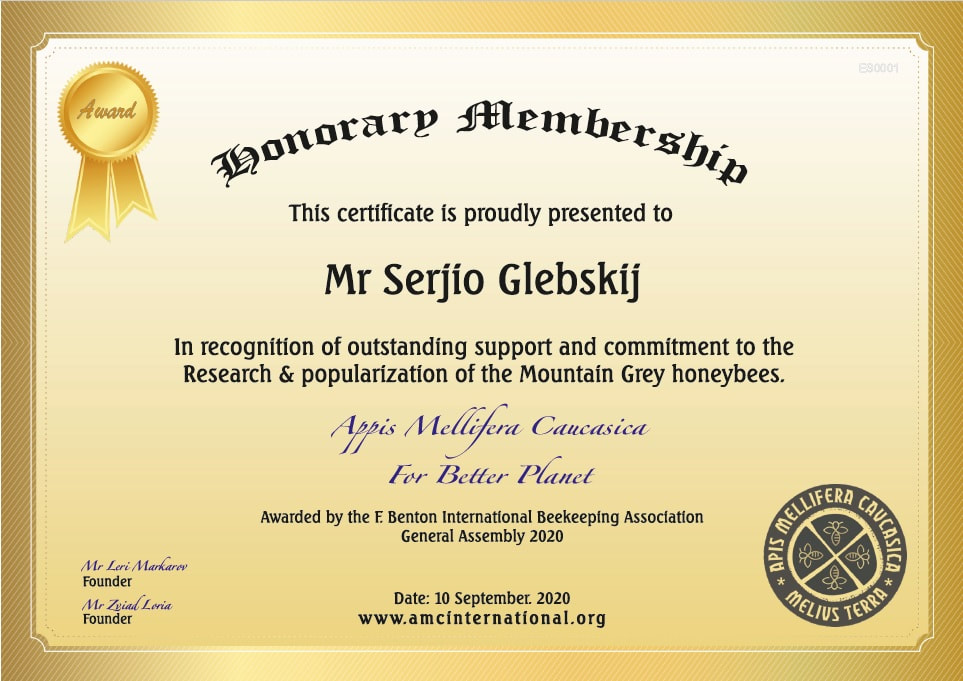 RELATIONSHIP BETWEEN TEMPERATURE IN THE NEST, THE AMOUNT OF BROOD AND THE DEVELOPMENT OF THE POPULATION OF VARROA MITES IN THE BEE COLONYhttps://amcinternational.org/varroa_mite.html 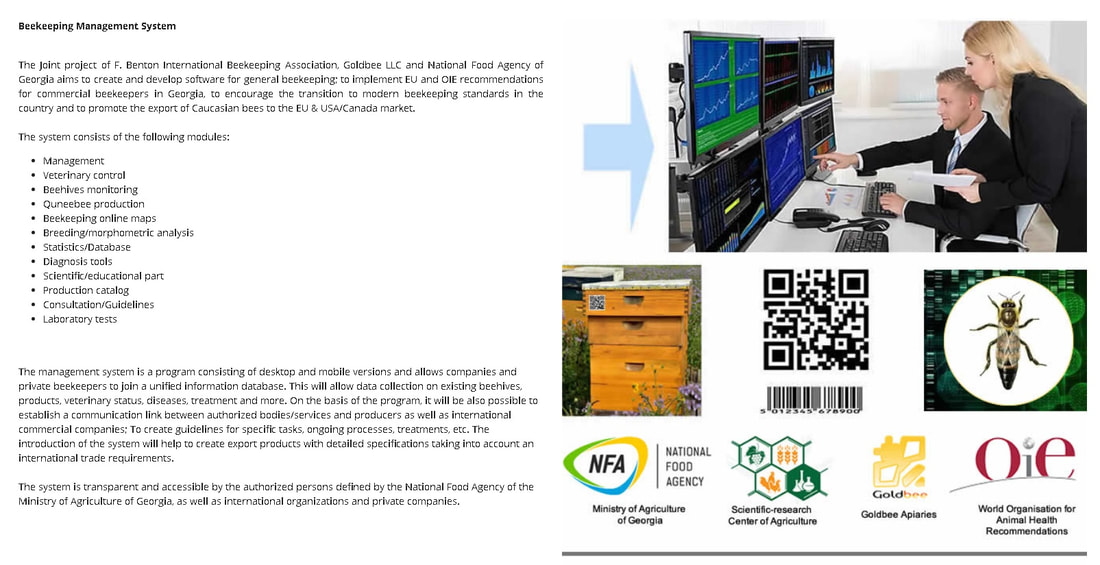 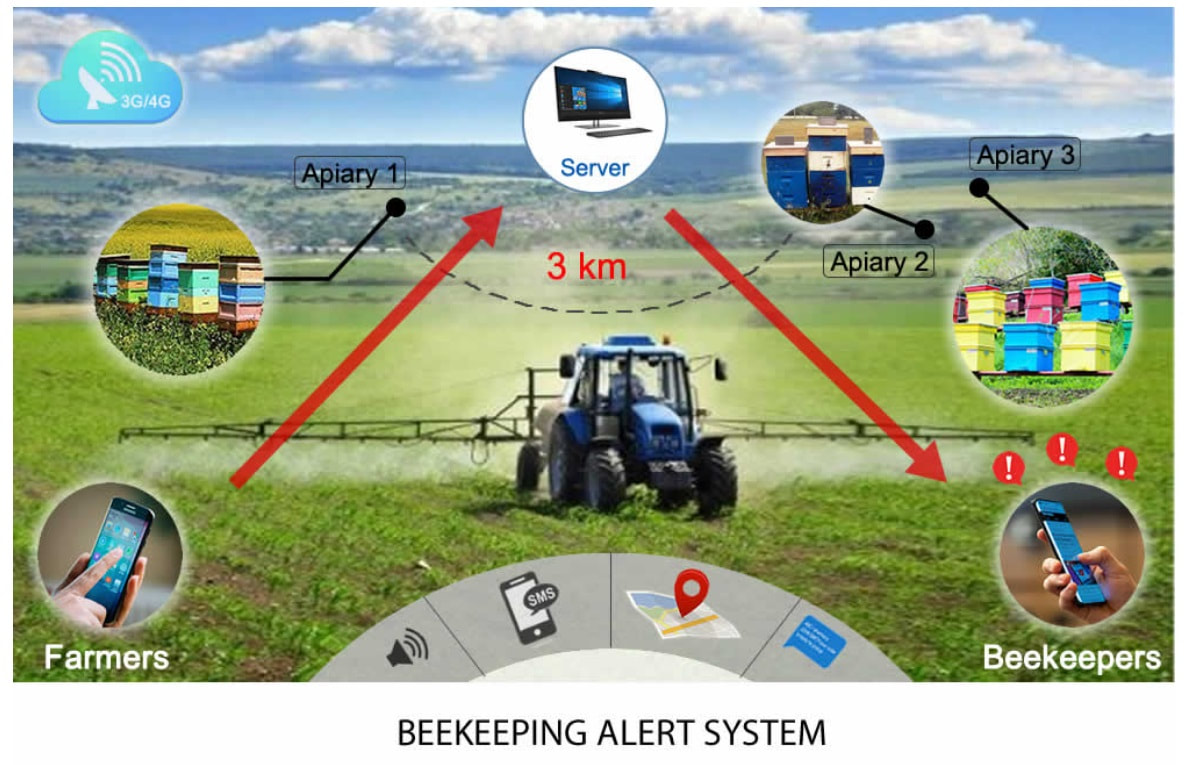 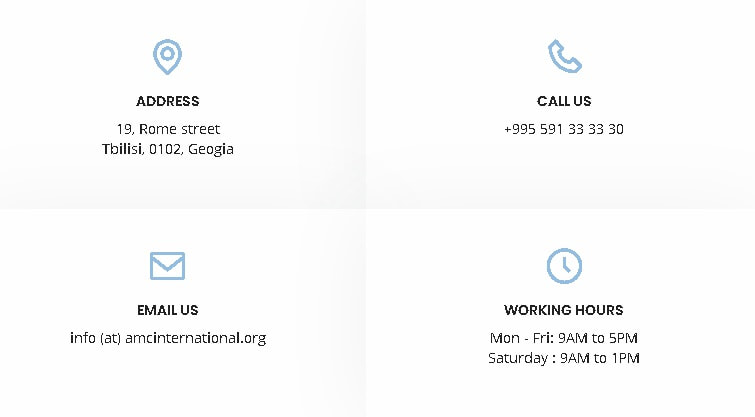